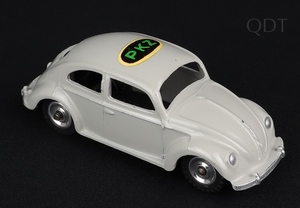 An interesting period piece – with the period promotional ‘PKZ’ label (Swiss Gent Outfitter’s Shop).
Information supplied by the owner and translated into English on the subject of PKZ models by Jean Michel Roulet:

“PKZ is a Swiss group with some 60 subsidiaries specialising in the manufacture and distribution of clothing.
The first Swiss clothing factory was founded in Winterthur in 1881 by Paul Kehl under the name “PKZ” which stands for Paul Kehl Zurich. In 1910, after the death of Paul Kehl, the company was renamed “Paul Burger PKZ” and later “PKZ Burger-Kehl & Co”.
From 1908 onwards, the brand called on the best graphic designers such as Ludwig Hohlwein, Charles Loupot and Peter Birkhäuser to develop innovative advertising campaigns.
But it also had other ideas in the field of advertising, one of which is likely to appeal to collectors.

During the 1950s and 1960s PKZ distributed small Dinky Toys cars to its young customers or their parents, initially purchased in bulk from the Swiss importer Riva & Kunzmann AG and later perhaps directly from Liverpool.

PKZ affixed to the miniatures a decal, sometimes two, representing the company logo as it appeared at the time. These logos appear on a flat surface, bonnet, roof or boot, except on some vans such as the Trojan Esso where they cover the “Esso” oval exactly on each side.

Many English and to a lesser extent French Dinky Toys were used by PKZ and distributed generously to customers in Switzerland. In the first exchange markets in Geneva, Yverdon or Zurich, Dinky Toys with PKZ logos were common, sometimes a little chipped because they had passed through the hands of children. But in any case, new or used, they were not in great demand, especially as good quality decals did not go away easily.

But as fashions changed, Dinky PKZ’s became rare, and almost 50 years later, they have become very difficult to find, so that a Dinky PKZ that was 50% cheaper than an unused Dinky in 1970 is now easily worth 50% more than a strictly commercial model. That’s the way things are!

This VW model is finished in light grey with shaped spun wheels. and silver trim. Shiny base and minimal marking to the original glossy paint finish. Early version of the PKZ on the roof is complete. 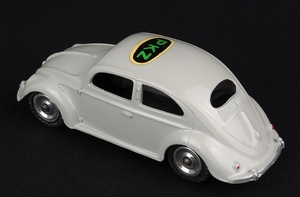 (The first PKZ decals consisted of a black oval surrounded by white with the three PKZ initials, of the same size, in green. Later on, the new logo was applied with only the three letters in white on a colourless background, the central letter K being smaller than the P and Z). 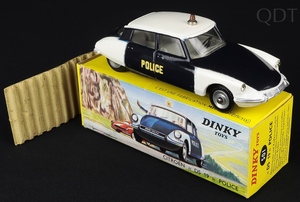 Citroen DS19 'POLICE' Car by French Dinky Toys, No. 501. Very near mint/boxed, with packing piece. From The Woodside Collection. 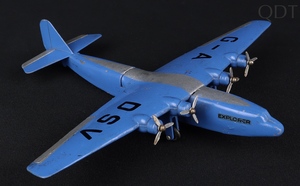 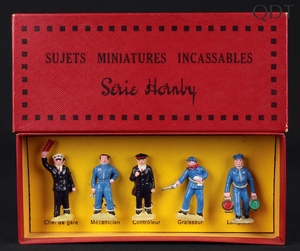 Hornby Series No. 10 Miniature Figures. Mint/boxed. A delight! From The Heart of England Collection.