Reflections on one of the biggest selling Corgi models ever – Corgi 261 James Bond’s Aston Martin DB5.

It is true to say that Corgi 261 James Bond’s Aston Martin DB5 was one of the most successful Corgi models ever – capturing the hearts and minds of many a child in the 1960’s. But don’t take our word for it – look at the release numbers – close to 4 million! Issued in time for Christmas 1965 and tying in (of course) with the release of the James Bond film ‘Goldfinger’ just a couple of months before, this model must have been on every boy’s Christmas wish list!
And don’t forget the James Bond Aston Martin is still a force to be reckoned with today and to date, in various guises and updated forms, has sold more than 7 million.

With so many models issued, it was inevitable that some changes occurred along the way.
We have noted over the years that although all are gold (which if you stop for a moment and remember that the car in the film was silver – is a curious point in itself), there are different shades and intensities raging from a deep true gold to a rather more subtle pale shade. We note that the model when viewed from the rear bears a strong resemblance to a DB4 (rear lights detail and petrol cap). But these details were incidental – at the time, the car was an exciting innovation with gadgets to thrill – bullet proof rear screen, retractable machine guns and of course the best of all – the ejector seat mechanism! 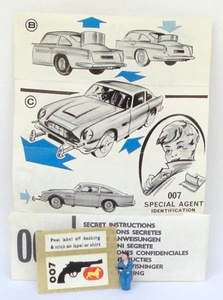 Note the 2 different casting types, one with indicator light detail and double ‘side vent’ and then without indicator and less vent detail (thanks to Jose, and others, for reminding us of this): 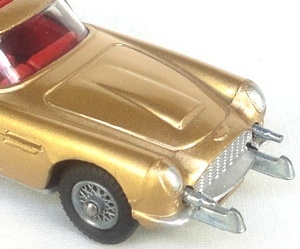 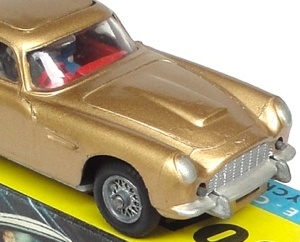 But on to the little details, largely concerning the box types.

1st issue – no shading detail on outer box, no arrow on plinth base. 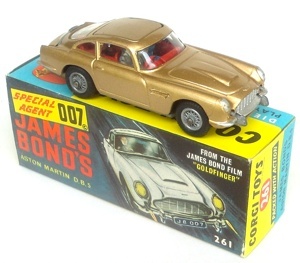 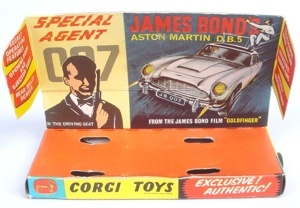 It has been said that some children at the time were either unaware that the secret instruction envelope was included, or if they were, they were unable to find it, leading Corgi to having the plinth re-printed. Perhaps to differentiate those with and without arrows, the outer boxes were changed too, but this may have been coincidental.
It is not certain that the shaded box detail and arrowed plinth were introduced at exactly the same time, so it is more than possible that some cross-over combinations exist.
Our feeling is that the arrow detail was changed first so unshaded outer boxes with arrowed plinths can occur too. 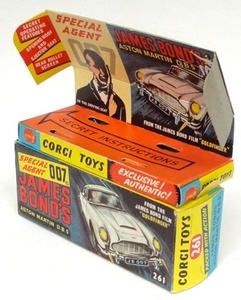 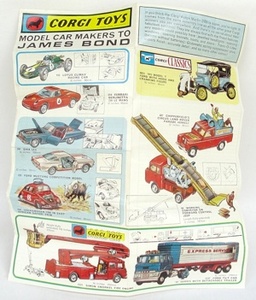 Later issue – box as above, car is almost a toffee-gold colour, and the roof interior is in light tan. 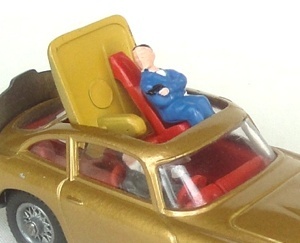 as compared to the standard issue: 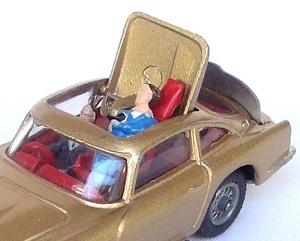 We hear that there is a plastic roof interior, but it is our belief at time of writing, that this is referring to this issue. Unless someone else can tell us differently!
How to tell whether it is plastic or metal? Well, it is quite unpleasant but the tongue tip test will always instantly tell you what you want to know ( cold to tongue tip = metal, warm to tongue tip = plastic.)

As always, we invite any further correspondence on all of the points raised in this article – it is good to share!