An article kindly submitted to us by ‘A Collector From The Rock of Gibraltar’ in which he considers in detail the different versions of Corgi 272 James Bond’s Citroen 2CV. Many of these items may be found in the QDT Archive under their original listings. 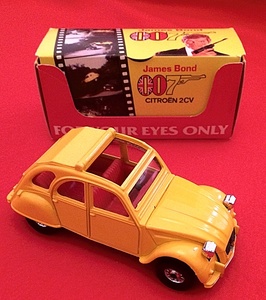 (Figure 1.The small box was the original used for the main production run) 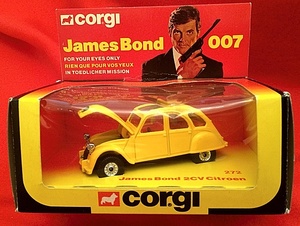 This car featured prominently in the Bond film, ’FOR YOUR EYES ONLY’. The small box as featured in figure 1 was the original box used for the main production run of this model until at a later stage it was replaced by a detachable header card style box version (figure 2). Curiously this model was never featured, nor was any reference made to it, in any trade or retail Corgi catalogues. This iconic model was released by Corgi during June 1981 and can be found in two different colours: Lemon-Yellow and in Deep Yellow. 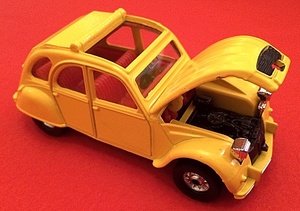 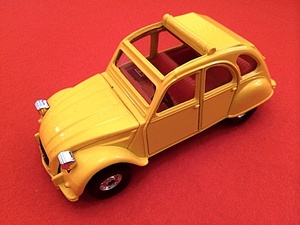 (Figure 4. Opened roof section with the simulated canvas rolled back)

It is evidently clear that Corgi’s marketing department had never been enthusiastic about this model and it therefore received far less than normal attention, to the point that even the box was minute. It did little to make the model stand out on the shelves but nevertheless achieved the normally high sales attributed to most of Corgi’s James Bond models.
The model has an opening bonnet mechanism which can be activated when the front wheels are depressed, as well as an opened roof section which clearly shows the simulated canvas roof rolled back half-way.

Corgi 272 ’ Gold-Plated (cellophane fronted detachable header card style window box)
As sales of this model were very high, Corgi decided to introduce a special promotion to tie in with the most successful shop sales in 1981, so 12 Gold-Plated versions of the C272 were produced. The Gold-Plated model was released in the cellophane-fronted detachable header card style window box similar to the second version box used for the normal C272 production model.

Gold Plated Corgi 272 James Bond 2CV from ‘For Your Eyes Only’. 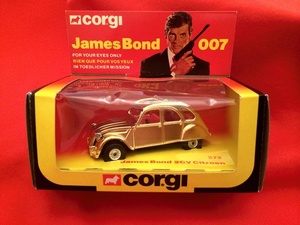 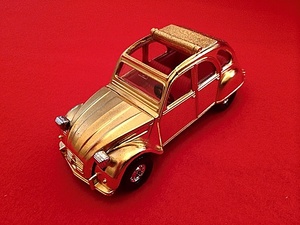 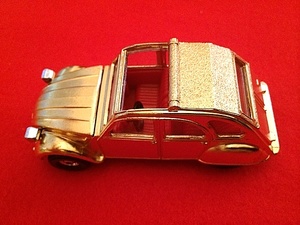 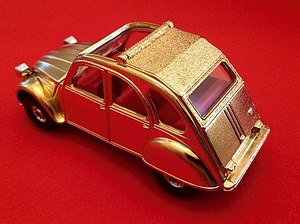 This particular item is mounted on a black wooden plinth with a partly obliterated plaque, although, if carefully examined one can read ’ ‘For Your Eyes Only ’ 24th June 1981’. 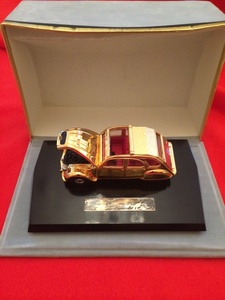 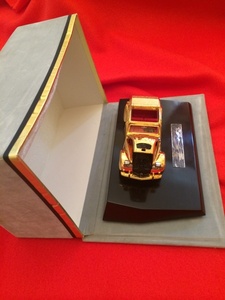 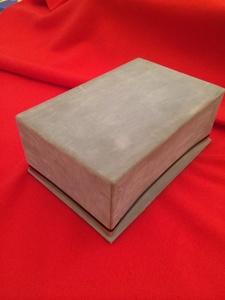 Why this gold-plated model has this type of presentation box is a mystery. It had been believed that this model was removed from the original window-fronted cardboard box when issued by Corgi and carefully mounted on a wooden plinth and housed in this pale blue suede box by a previous owner. 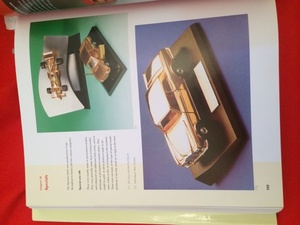 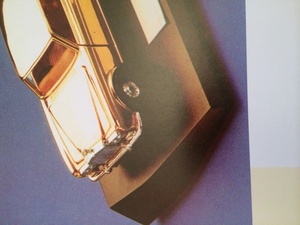 (Figure 12 & 13. Extracts from The New Great Book of Corgi which shows a similar plinth and plaque)

After carrying out some research on The New Great Book of Corgi issued by Marcel Van Cleemput, it can be read that Corgi had previously released some ‘special’ models on similar plinths and plaques (figures 12 & 13) as to the one mentioned above. Upon further investigation, the wooden plinth was removed from the base of the pale blue suede box and evidence uncovered clearly shows that this presentation box has been professionally manufactured. As can be seen in figure 14 the underside of the plinth is lined with the same type of pale blue suede of the box. 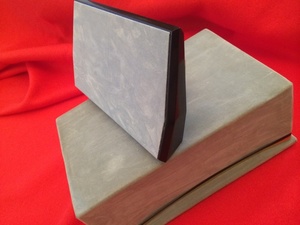 (Figure 14. Underside of the wooden plinth lined with the same pale blue suede of the box)

Also in figures 15 & 16, the area where the plinth is fixed on to the base of the box can be seen; this area is clearly demarcated. 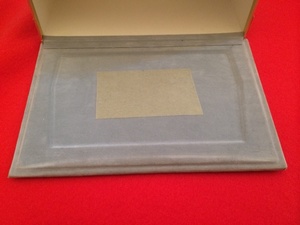 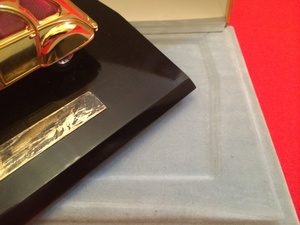 (Figures 15 & 16. Exposed area where the plinth sits on the base of the case -
See dedicated area for the location of the plinth clearly demarcated)

Based on this and all of the above evidence and research it can be argued that the following theory can be attributed to the origin of this presentation case.

Upon the decision made by Corgi to produce these gold plated models as a special promotion to tie-in with the shop sales of the C272, the production team were instructed to produce this unique case together with the wooden black plinth and the plaque, to house the gold-plated C272 models. But due to unknown reasons, possibly due to the high production cost of these boxes or time constraint, these presentation cases were not manufactured so therefore it was decided that the gold-plated models would also use the original window-fronted boxes which were used for the production models. 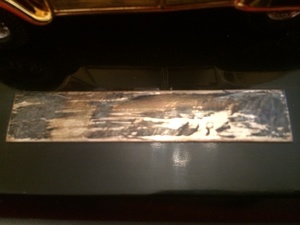 Finally – Why was the brass plated plaque mounted on the wooden plinth, partly obliterated? (figure 17.)

Personally I am not convinced that this would have been done by any previous owner of this model. Therefore, based on my hypothesis on the origin of this pale blue presentation box, my theory is that as a consequence to Corgi’s decision not to produce these unique cases to house the gold-plated C272 models, one of the production team members decided to deface the commemorative plaque.
Eventually, this unique presentation case was removed from the factory and has inevitably appeared into the collector’s market.