Thoughts on the importance of Provenance written by a Dinky collector, Richard Harris, with our own personal note, too.

Richard Harris writes:
A note of caution for collectors of diecast models ’ is that elusive mint model really as good as it seems?
I have recently had the opportunity to purchase (from two different vendors) allegedly mint examples of a Dinky 30 series Bentley And a 38f Jaguar. Whilst condition descriptions can to some extent be subjective, I very much doubt whether all-original mint examples of either model (or any one of the early post war series) still exist, given the passage of time since manufacture and I think it is instructive that your extensive Archive contains no such examples of such Dinky models.

Indeed, from what we know of the apparently limited quality control which prevailed at Binns Road at the time in question, I wonder how many of the models which rolled off the production line (and probably onto the floor in the occasional case!) would have been graded by you (at the time) as mint!

When questioned on the history of the two models to which I refer above, both vendors became somewhat coy and went for the easy option of contending that no history was known in either case. I found this somewhat surprising as (on the balance of probabilities) one might reasonably expect such pristine all-original models to be, perhaps, one or two owners from new with some idea of their history offered quite openly.

If the models were truly genuine in all respects and had, for instance, come from the Estate of a lifelong collector, why not simply say so? Unsurprisingly, I decided to walk away as the vendors declined to provide any information whatsoever to allay my suspicions.

I think it is most helpful that your site generally gives some indication as to where models offered for sale have come from as well as providing a detailed description including any flaws which you have detected following your routine ‘forensic’ examination in each case.

Where possible, I consider that even more history (particularly in relation to pieces noteworthy for their scarcity or exceptional condition) would be welcomed by prospective buyers as it would lend an extra note of authenticity.

To sum up, I think that whether you are operating on a limited budget or can afford to indulge your passion for collecting on a regular basis, a little provenance can go a long way!

QDT note:
The subject of provenance can be a thorny issue. For the majority of models, this is a pleasing ‘additional extra’, where it is available. In most cases, models have changed hands several times, so the history has become complex, and is largely irrelevant.
However for rare models, one-off pieces, pre-production samples, promotional items, any information that can be gleaned is invaluable. However, anecdotal ‘evidence’ or ’collector’s tales’ (very similar to ’fisherman’s tales’ we find) are only distant relations to the truth!
We have just sold (for the second time in its history) a most exciting item – the wooden prototype of Dinky 104 Spectrum Pursuit Vehicle. The impeccable provenance of a signed letter from Mike Richardson was included. 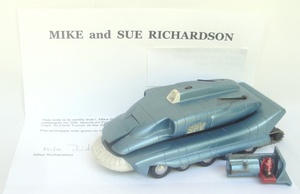 It is rare to be able to offer such conclusive Provenance when one is selling a rare item, and in cases where no such incontrovertible evidence is available, then one has to rely on the integrity of the person/company offering it to you. Go on your ‘gut instinct’. Choose your dealer/source carefully. Have they looked into the item’s history, ‘grilled’ the original owner, supplied written accompanying information? Another recent sale of ours – illustrates this point. We have just sold a rare Corgi Rover 2000 Presentation item. Part of a small batch of models commissioned by Rover in 1963. 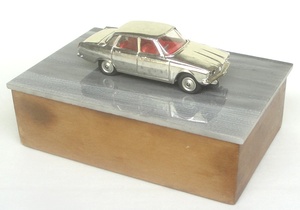 The owner has done his homework – this particular example came to light during a recent house clearance. He compared it to another he had in his possession as well as comparing it to one in The Gaydon Museum Warwickshire. He supplied the history of this promotional item for the new owner too. You may like to refer to a previous Blog of ours, under the heading ‘2013 -Time To Be Sensible’, point no 7 on this subject too.